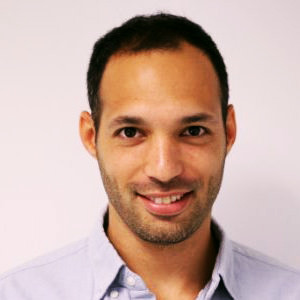 We receive free products to review and participate in affiliate programs. See our disclosure page for more information.

Have you been combing through the internet in search of a grill that can give your barbecue the perfect smoky taste? Chances are that an easy-to-use charcoal grill with a modern BBQ system is what you need; a grill with a relatively broad cooking area and a structure that's no hassle to clean. Fortunately, the Weber Performer Deluxe fits the description perfectly.

This review will extensively uncover some crucial details about the Weber Performer Deluxe, such as features, construction, performance, possible complaints, and more. If you wish to read a shorter review, scroll on to the end.

If an excellently grilled barbecue coupled with the traditional Smoky taste is what you crave, then the Weber Performer Deluxe is perfect for you. It comes equipped with a cooking area of 363 square inches, which is ideal for outdoor home cooking, camping, and a small gathering of three to four people.

Who Do We Think Matches with Weber 22" Performer Deluxe Charcoal Grill? 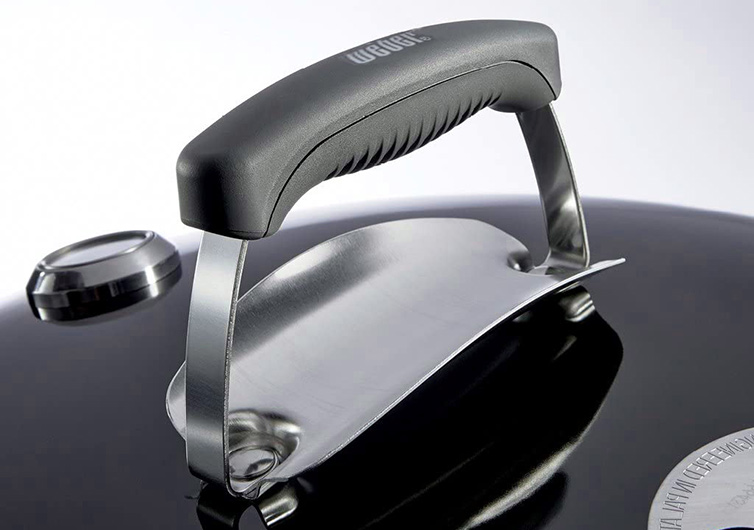 Webster is a product of the founder's love for a perfectly grilled barbecue. The happiness he witnessed on people's faces who enjoyed his BBQ led him to create the famous "Kettle Grill." This invention captured the heart of all barbecue enthusiasts in 1952. It later formed the foundation for Weber's long list of innovative products.

The company also developed its line off grilling accessories and tools, including the Weber Briquettes, Flavorizer, I-grill, and a few others.

The Weber Performer Deluxe comes with a relatively broad cooking space; a 22" (diameter) porcelain-enameled bowl and a 363 square inches cooking area. That's enough space for you to pack 13 hamburgers at once.

Firing up the grill is easy, thanks to the Touch-N-Go ignition system. This feature lights up the coal with propane gas from the disposable bottle on the grill. So, instead of struggling with a match and kerosene, you simply push a button and start cooking. Also, there's a nylon handle on the lid to protect your hand whenever the Grill rises to extreme temperatures.

Weber decided to incorporate their Gourmet BBQ System into the Performer Deluxe Charcoal Grill. This feature includes a two-part grate system that lets you remove the center section of the steel-plated hinged grate and replace it with any cooking surface you wish, including Pizza Stone, Wok, or Griddle.

You can easily regulate the cooking temperature by moving the two charcoal buckets on the grill to create direct and indirect heat zones. You'll never have to worry about overcooking your meals. Besides, you can set a timer with the LCD timer to remind you to check the temperature often. 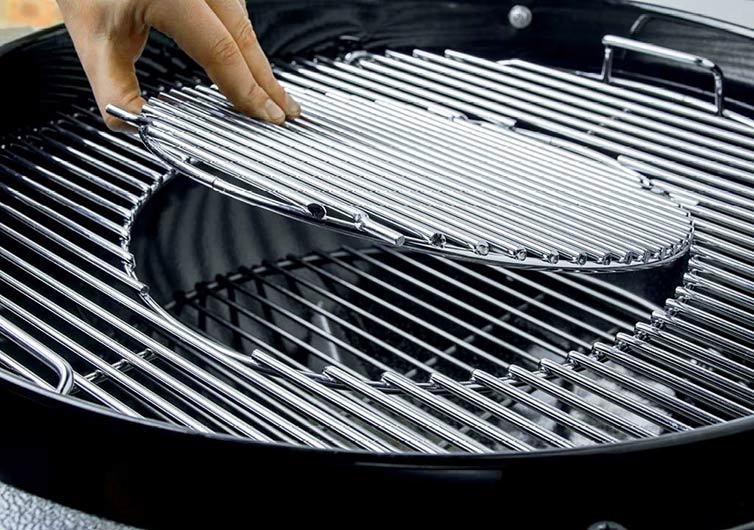 When fully assembled, the Weber Performer Deluxe measures 43.5-inch by 48-inch by 30-inch and weighs 91 pounds. It's also a portable cooking grill due to its lightweight and wheels that aid locomotion.

The grates are made of heavy-duty steel with the right thickness to withstand maximum heat from the grill. Ultimately, the durability of this high-quality grill proves that it is worth more than its price tag.

The Touch-N-Go ignition system is one feature that makes the Performer Deluxe a grill worth considering. With just the push of a button, you're ready to cook. Also, the ability to regulate the temperature of the grill will give you the freedom to prepare many meals that require & different heat intensity.

If you plan to leave your product outside, ensure you cover the charcoal bin to preserve the coal within. This storage chamber is built to protect the fuel from rain, snow, sunlight, and similar weather elements.

Cleaning the Weber Performer Deluxe is a hassle-free process. It has a one-touch cleaning system that lets you clean up the ash and debris by scraping it into a removable ash catcher.

Also, the majority of its parts are coated with porcelain, which makes wiping dirt off the grill a simple task.

Note: You'll need to squeeze the ash catcher's handle before you can detach it from the grill. 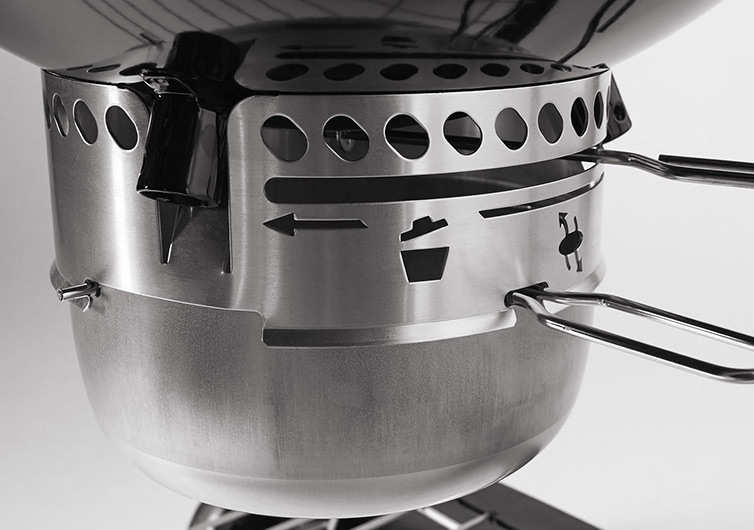 1. Kamado Joe 18" KJ23RH Classic I Charcoal Grill
The Kamado Joe Classic I is innovative and features a heat-resistant shell-like covering that traps both the smoke and moisture. This charcoal grill lets you barbecue with an average temperature of 225°F and maximum heat output of 750°F. It weighs a whopping 188 pounds, but it's sure to provide remarkable results for any grilling.
2. Char-Griller E82424 Side Fire Box Charcoal Grill
This horizontal smoking chamber from Char-Griller brings the Texas grilling style to you. Its ultra-lightweight of 48 pounds makes it the perfect grill for your backyard. Due to its small cooking area that's less than 300 square inches, it can only handle approximately ten burger-sized meals at a time. 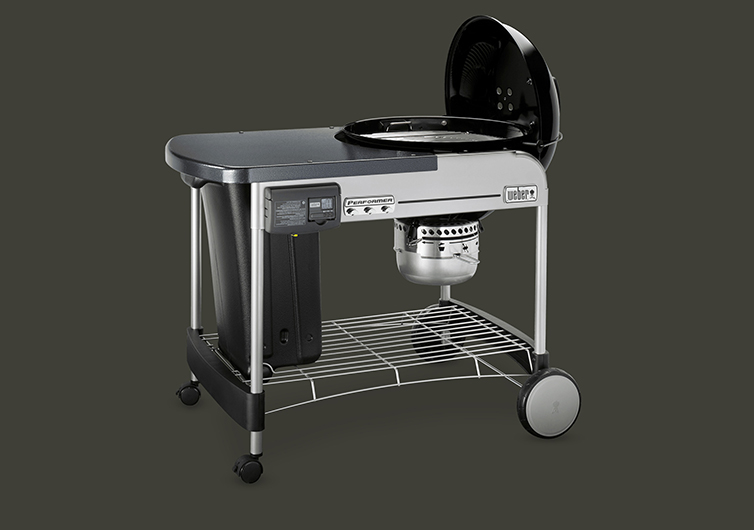 The Weber Performer Deluxe Charcoal Grill comes equipped with the Touch-N-Go ignition system, which lights up the grill with the push of a button. It also lets you monitor the grill's temperature via the built-in thermometer so you won't overcook your meal.

If you don't own hot mittens, that's okay; the lid features a heat-resistant material that lets you open the cover without hurting your fingers. As for portability, the Weber Performer Deluxe weighs 91 pounds and is attached to a cart with two wheels to aid locomotion. There's also a storage unit attached to the Grill's right side, which houses the coals.

The Weber Performer Deluxe is a relatively compact grill with a dimension of 30 x 48 x 43.5 inches. It has a cooking area with enough space to handle 13 hamburgers.

Ultimately, if you need a reasonably portable barbecue to grill meals for yourself, your family, or a small gathering of friends, the Weber Performer Deluxe is your best bet.

Avid Griller is a participant in the Amazon Services LLC Associates Program, an affiliate advertising program designed to provide a means for sites to earn advertising fees by advertising and linking to Amazon.com.